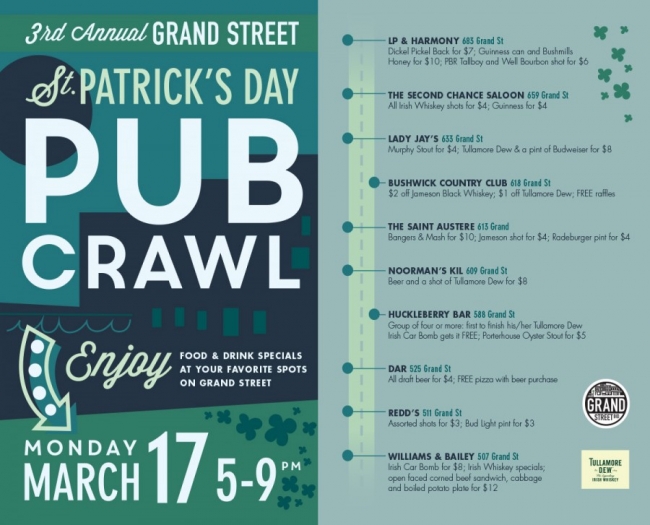 Jumpstart Your Week is our weekly feature of things to do in Brooklyn designed for you to start your week pumped and keep you going so you can get over the hump.

Pints of Gold
Today, all signs point to Grand Street for their third annual Saint Patrick’s Day Bar Crawl. Ten restaurants and bars team up to offer magically delicious food and drink specials. Get assorted shots for $3 at Redd’s. Irish Car Bombs, Whiskeys, open faced corn beef sandwiches at Williams and Bailey, Bangers and Mash at The Saint Austere, and more. Run out of work, stop at each location on the crawl, and then wobble home. It’s tradition.

Theater of the Mind
In a world where the bad guys seem to be having all of the fun, it’s not uncommon to ask “Why be good?” Characters attempt to answer this and other philosophical questions while navigating through moral dilemmas in the theatrical production “Republic,” by the Hoi Polloi Theater Company. Under the direction on Alec Duff, actors Jess Barbagallo, Lori Parquet and Jason Quarles, take on the “blueprint for a good life,” as laid out in Plato’s Republic.

Reading Gone Wild
Who says there’s no room for debauchery among the literati? Homemade cookies, enough wine to make you participate in the Bieber vs. Believer sing-a-long, and break up poetry from high school are all on the agenda at the Renegade Reading Series. Readings from Kelly Marages, Hubert Vigilla, Ed Kearns (Buzzard's Banquet), Melissa Swantkowski (Bodega Magazine), Katie Dykstra (Guernica).